Update from the Field: Beetle Mania

For the past few weeks, reports have increased for different kinds of beetles attacking both corn and soybeans. The first pest is the Japanese beetle, which is normal for this time of year. The second looks like a Japanese beetle on steroids (figure 1)! These insects, called green June beetles, Cotinis nitida, are 3-4 times bigger than the normal Japanese beetle.

Figure 1: Green June beetle looks like the Japanese beetle, but 3-4 times the size. This picture was taken outside of Gilead, IN, in 2018.

Beetles can be detrimental to the pollination of the corn ear. As pollen drops from the tassel, it has to come into contact with the silk coming out of the top of the ear. The silks have to be a half inch long before the silks will accept the pollen and fertilize the corn ovule. Beetles can eat the silks, preventing them from getting long enough to pollinate the ear. If you decide to apply an insecticide, you want to be sure that decision is justified by the economics of the system. The economic threshold is the level of insect pests or damage at which a control should be implemented to prevent economic loss from occurring. In corn, the economic threshold is three or more beetles per ear with silks clipped to a half inch or less, while pollen shed is less than 50 percent complete.

Japanese beetles can be devastating to a soybean crop, too. They can defoliate the soybean crop and reduce yields. The economic threshold for soybeans is 30 percent defoliation prior to bloom and 20 percent after bloom, with the beetles still present in the field and actively feeding. Sometimes the percent of damage on a soybean plant can fool a person. Defoliation always seems to be higher than the actual percentage. In this chart from the University of Illinois (figure 2), you can see 40 percent defoliation looks like the plant is completely gone.

Figure 2: Percent defoliation of a soybean leaf. Picture is from the University of Illinois.

Our agronomy team witnessed Japanese beetle and grasshopper pressure first-hand during a recent visit to our research plots in central Nebraska. Figure 3 shows the level of damage by the pests commonly seen throughout most of the field. In two of the trials, The Andersons is experimenting with different fulvic acid and microbial treatments. In this corn (figure 4), the leaf damage was almost non-existent. As one observer shared, “This corn just seems happier!” We await the yield results from these trials and will be excited to share more data about the experimental work we are doing with fulvic acid and microbes as we continue to bring innovative solutions to our customers and their growers. 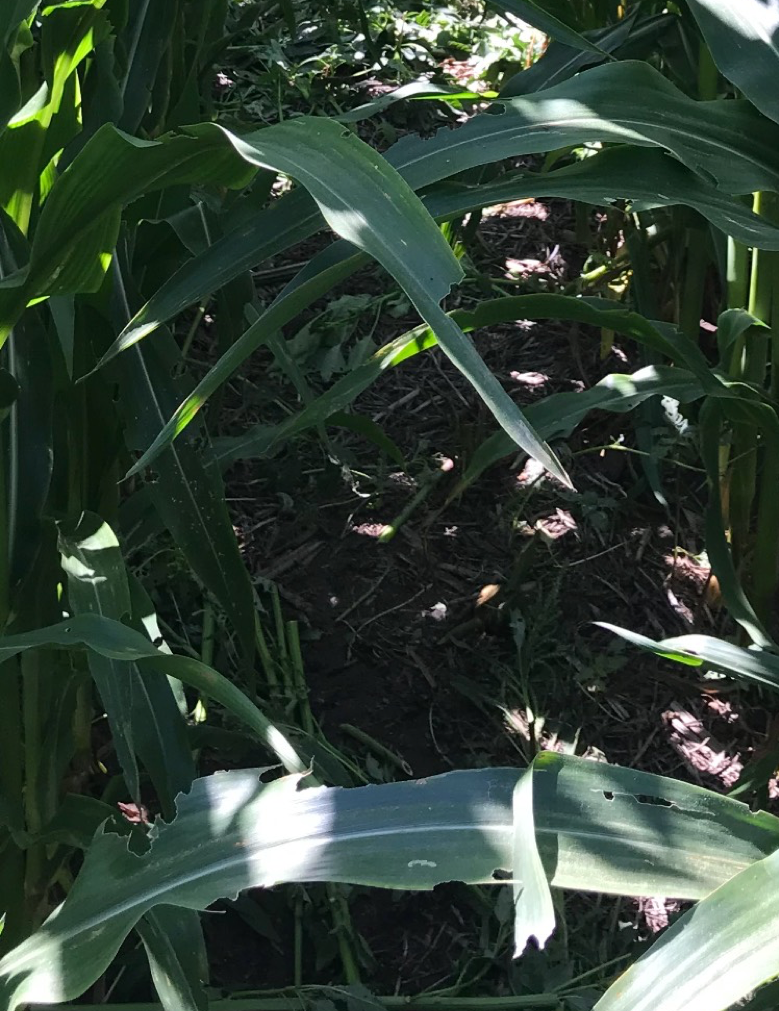 Figure 4: Corn in the same central Nebraska research plot with much less insect pressure. This healthier-looking corn was treated with experimental applications of fulvic acid and microbes, July 2018

To close, if you have a question about whether or not to spray an insecticide on your corn or soybeans, contact me or one of The Andersons’ Ag Advisors, and someone from our team will help you determine a solution. Insecticides are very reasonably priced today and can be “piggy backed” with an herbicide or foliar fertilizer, such as OverPass® CF or OverPass SF liquid fertilizer. Consider doing a tissue test prior to insecticide application to determine what additional nutrients your corn or soybeans need to fuel them through ear fill and pod set. This will help you get the most value for that trip across the field.

Dave Dyson is a regional agronomist for The Andersons’ Farm Centers which are located throughout Ohio, Michigan, and Indiana. He is an Indiana native and grew up on a dairy farm in Miami County. A graduate of Purdue University with a degree in Crop & Soil Science, Dave has a deep knowledge of various agronomic topics and is committed to helping growers improve their crops. If you have any questions, Dave can be reached at david_dyson@andersonsinc.com.

OverPass is a registered trademark of The Andersons, Inc.